On Witnessing, Remembering and Performing After 9/11/2001 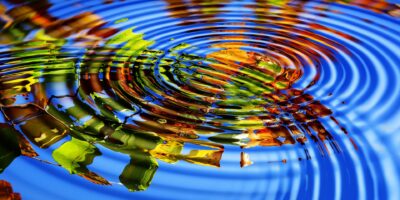 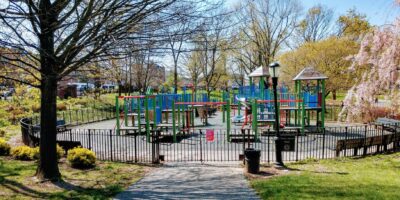 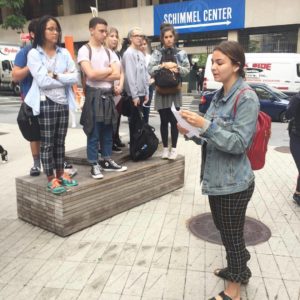 I wear many hats within my work as a theatre maker, filmmaker, graduate student and adjunct professor at several universities. My Ph.D. work has helped me better recognize how all these identities intersect, inform each other and make me a well-rounded artist, scholar, and teacher. As an instructor at Pace University, one of my favorite teaching experiences has been taking part in teaching “Learning Communities,” which are 6 credit classes led by two professors that place two disciplines in conversation with each other. Since I teach in the theatre and performing arts department, I have experienced co-teaching Learning Community classes in collaboration with anthropology, sociology, literature, peace studies, gender studies, and history. Having the chance to explore how theatre and performance work with other disciplines is always illuminative. It’s an opportunity to push both my scholarship and practice further by experimenting with how the methodologies from other disciplines can inform the creation of a live performance. Sometimes these experiments fail, but other times we end up with something special.

As a Millennial who was raised in an area of New Jersey that was deeply affected by the events of 9/11/2001, much of my theatre practice has grappled with 9/11 and how the events of that day have shaped contemporary politics. This has been a question that I have asked in much of my work, which has looked at the implications of the “war on terror”, patriotism, religion, security and surveillance, xenophobia, and the refugee crisis. These issues are also present in the conversations and questions that my students are grappling with, many of them who were born after 9/11/2001.

One of the first projects I do with students at the beginning of the semester is one I call “The 9/11 Project.” In this project I have students create brief documentary theatre pieces about the September 11th terrorist attacks based on their own memories as children on that day, or, as time has gone by, interviews with people who were around their age on that day and want to share their memories.

Documentary theatre is a form of theatre that is created by interviews, through the use of personal testimonies, accounts, and what can be perceived as “real” archival research. Similar to the documentary film genre, documentary theatre attempts to present “the truth” on stage. However, students soon realize from working closely with the text and experimenting with various forms of editing, that “truth” is subjective and their “truth-telling” as editors and theatre-makers is informed by their own biases. In the class I developed called “The Artist as Witness: Documentary Theatre in Places of Conflict” we explore documentary, autobiographical, ethnographic, and testimonial theatre: all of these genres fall under the larger umbrella of what theatre scholar Carol Martin has called “theatre of the real” (And she has written a lot about this… so check it out!). While helping students connect with recent American history, documentary theatre opens up dialogue around ethics, witnessing and editing as it pertains to theatrical storytelling.

The methodologies I’ve used in gathering stories for documentary theatre projects are influenced by theatre and oral history practices. When teaching students these methods I place a strong emphasis on teaching consent and making sure the subject of the interview understands why, where, and how the interviews are being used, and the creation and signing of release forms. This project helps students learn how to listen for the purpose of understanding, as opposed to only responding and often builds empathy and a deeper understanding of history. Following the presentation of these projects, we talk about the aftermath of 9/11 and how current political policies and/or xenophobia continue to impact them regardless of whether or not they were even born on that day.

I have done several variations of “The 9/11 Project” over the years and adjust it based on the needs and goals of the specific class I am teaching. When I started teaching in 2012, the students would create monologues out of their memories from that day, by interviewing each other, transcribing the interviews and performing them for each other. Most of the students were in kindergarten or first grade on that day, so their memories are from the perspectives of elementary school children. From those monologues, they would create small scenes (3-5 minutes each) by collaborating with other students in the class who had memories that addressed similar themes. This helped them to develop editing skills and raises questions of the role of the editor in storytelling and in writing history. Our discussions that followed dealt with childhood memories, how memories are constructed and what they remember versus what they have been told over the years.

Over the years, I have watched this project grow from an autobiographical account to the performances of memories that do not belong solely to the students. Sometimes the memories would be passed along from their parents, and often, they would be exploring what they have been taught about 9/11 from the media. Currently, the project is entirely interview-based as many of my college freshmen were born in 2001 (and some in 2002).

Pace University is five blocks away from the World Trade Center. Once we perform the scenes in our classroom, we bring them outside to different locations near the World Trade Center site. This is an opportunity for students to think about how space and place impact performance. This is also an opportunity to see how the work is received publicly. In many cases, people walk by and often, through the middle of the performances. However, there have been situations where first responders, firefighters and other people who were there on that day have stopped, watched the performances and spoke with the students about their own memories. The performances generate very personal conversations about memories and history. Students are often very moved by the experience and feel a connection to history and space.

Inspired by this project at Pace, this past April I started developing a workshop performance that explores the September 11th terrorist attacks through the lens of youth who were born in the years following for the 2019 CUNY Graduate Center Ph.D. Theatre Student “Performing Screens/Screening Performance” conference. Entitled 18 Years Later: Voices of Post-9/11 , this is a documentary theatre performance created through testimonies and interviews with young people regarding how and what they have been taught about the 9/11 terrorist attacks, and how the events that day have impacted their lives. The purpose of this performance is to create a conversation around how we pass history, defining events, and memories onto the next generation, and explore how media, specifically social media, “creates memories” and distributes knowledge. The plan is to continue developing the piece and debut it at a theater in New York around the 20th anniversary in 2021.

For this workshop, I worked with a cast between the ages of 12 and 18. Their perspectives on  9/11 are particularly interesting because, for the younger ones, it’s only been taught as a history lesson in school. They are grappling with security, technology, domestic terrorism and gun violence in their daily lives and make connections between 9/11 and the legacy of violence in the United States, in particular feeling unsafe at school. In addition, I interviewed a number of people who were kids in NYC public schools on September 11, 2001. Their memories range from being blocks away from the World Trade Center, and part of the forced evacuation, to being in Long Island, and picked up in the middle of the day without understanding why or what happened, and wondering why their parents were crying while watching the television. These interviews were performed by the young actors on stage.

In New York City everyone has a story and a memory from that day. I am interested in seeing a theatre that witnesses these memories and experiences while helping us also understand the impact of the political choices that were made in the aftermath. I am also interested in seeing how cross-disciplinary practice and praxis can help inform this work both in and out of the classroom. 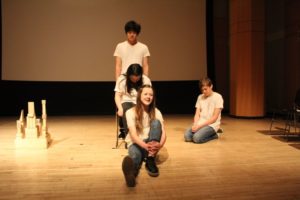 From 18 Years Later… at the Siegel Center in May 2019. The full production can be found on HowlRound. Photograph by Melissa Ingle.

Visible Pedagogy by Visible Pedagogy is licensed under a Creative Commons Attribution-NonCommercial 4.0 International License.
Loading Comments...
Need help with the Commons? Visit our
help page Send us a message