Musings on Illness, Theatre, and Community

It was a rare moment that I was actually home. It was a rare morning that I actually had the time to go to the gym. Well, to be completely honest, I didn’t really have the time – I carved it out three hours before my train to south Jersey was scheduled to depart, because my lifestyle these days is bordering madness and any second I have free I desperately try to practice self-care so I don’t implode. My mom is sick. She’s very sick — “terminally ill.” That morning, I received a text from a former student, Quentin: 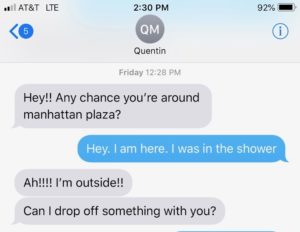 This was far from a typical former student encounter. But then again, I now realize that my first undergraduate teaching experience was far from what most people have. I was hired to teach a 10-hour per week course on ensemble theatre for two years with the same 18 students. It was part of their major and program requirements. Over two years, we built shows together and toured them throughout the tri-state area and abroad. It’s a brilliant program in many respects, but one of the unintended consequences of being with the same group of students for 2 years (and mentoring many of them on their junior and senior projects) is that for better or worse, you become a family. These particular students graduated two years ago and not a day has gone by where I don’t hear from at least one of them on e-mail or social media.

As Quentin is now part of my theatre company, I assumed he was dropping off something related to theatre work, but when I opened the door, he was holding a bright pink bag that contained a gift certificate to Le Bernardin, one of the most highly rated restaurants in the world, along with a card signed by all of the students who were in my first graduating class. The group was familiar with my excessive fangirling of restaurants. Ever since I “met” Eric Ripert, Executive Chef of Le Bernardin, in the French Alps a few years ago (on an episode of “Anthony Bourdain: Parts Unknown,” of course…) dining at Le Bernardin moved to a top spot on my bucket list. The word from Quentin was that based on my recent Facebook posts about my mom’s deteriorating condition, their cohort was concerned about me, and wanted to remind me that I was loved. My initial response to this surprise was to call my mother and share with her this sweet story. Like me, she had also watched my first class grow up by proxy, through the hundreds of stories and anecdotes over the years. I took a deep breath and it hurt. Sometimes in my excitement, I forget that calling her is no longer really an option, which is why he was there. 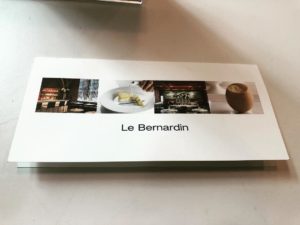 The gift certificate to Le Bernardin. Even the envelope that it arrived in was a new level of fancy.

I recently became a caregiver to my mother in New Jersey who has been chronically ill for the past seven years. Since October of 2018, she has had a number of critical health setbacks and near fatalities. Because of her precarious position and the position that I’m in as a caregiver, the goals and priorities of balancing Ph.D. work, teaching, survival jobs, and any outside obligations, have significantly shifted over the past few months. Initially, these blog posts were intended to be about incorporating theatre and performance pedagogy into everyday classroom learning, but there is a huge elephant in the room in terms of how I’m working this semester which cannot be ignored in my writing here.

My scholarly work asks questions of how theatre and performance function in conflict zones and areas of political unrest. I’m interested in the intersections of theatre and social justice. What role can the theatre play in solving big socio-political problems? One of the biggest criticisms that people who do this work hear (mostly from NGO’s and the folks not involved, unironically) is “why does theatre matter? Why does any of this matter?”.  And true, to make this personal, my mother’s health needs will certainly not be solved by performing a show about the healthcare system or her illness for her. However, I often wonder if perhaps a devised theatre process (a method of making theatre where the script content is created by an ensemble — or in many cases, the performers of the piece) would be helpful in that it would provide her and others in similar situations with an outlet for self-expression and purpose. I can imagine that a similar process could allow her to write about what’s on her mind and heart, to help ease the mental exhaustion of illness.

Similarly, for students, it’s during the process of creating a show where they often gain the most. Through theatre exercises, like improvisation, writing prompts, interviewing subjects (and performing the interviews), and games inspired by Brazilian theatre maker Augusto Boal (Theatre of the Oppressed), students gain critical thinking skills, and obtain and create knowledge outside of the ways in which knowledge is traditionally presented or valued. Theatre can help people of all ages get out of their heads and into their bodies, learn how to empathize with others and recognize that they’re part of a larger struggle. Theatre can also help students engage with and recognize broken systems and structures that are designed to reproduce inequity.

Each time that I visit my mother I leave with some (often difficult) takeaway and lesson learned about navigating our healthcare system and the ways it resembles academia. Despite a team of doctors, nurses, and healthcare professionals working on her case, my mother needs an advocate present because she’s unable to communicate. While many tasks are the responsibility of her healthcare professionals, most of her nurses and PA’s are severely overworked and underpaid, like many of us who are contingent labor for universities. Because she requires more care than an average patient in her rehabilitation center, many of her needs fall through the cracks.

Similar to the healthcare system, unsurprisingly, our university system is full of red tape, dead ends, and weekly bureaucratic nightmares — cracks through which students often fall. Each semester I have a handful of students who struggle with meeting financial aid deadlines and get barred from coming to class for a period of time (usually until their loans come through) and have to beg to stay enrolled in my class. For some students, the intimidating bureaucracy of the university forces them to take longer to finish their degree, or not finish short of a few credits. Like in the healthcare system, I often find myself having to be an advocate for students trying to navigate the university. Time and time again, I help them construct e-mails to various offices regarding financial aid, loans, making tutoring appointments and advising them on how to handle balancing work with school (a struggle I know well). Through mentorship, I teach students how to be advocates for themselves so that at some point they can do it on their own. 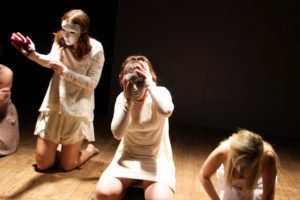 (Image featured above) My first cohort of students performing their ensemble-devised show at a venue in Manhattan. Through the process of creation, trial, and error, students are able to learn work ethic, effective communication and see how their ideas influence (or do not influence) an audience. 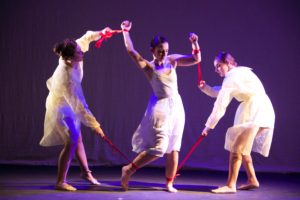 The same show, several months later in Bangkok, Thailand. Based on the students’ feedback and experiences with building the first show, the majority of the text was cut and the entire show was reimagined and rebuilt for a final time. This would be the fourth time the students built a full-length show over two years.

One of my overarching goals as an educator of theatre is to build community among artists and to instill in them a love for theatre, but even more so, a love for the community that theatre can create. Like anything, there are some days where I completely fall short and this utopian idea fails miserably. However, on days like February 1st, where Quentin showed up out of the blue, I am reminded that on some level I did help to build a community. And like the students have learned at various junctures in their undergraduate careers, it is there when I need it the most. 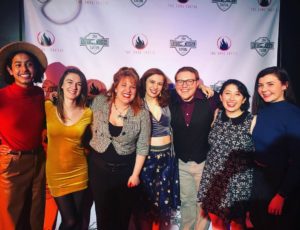 A few of my first cohort of students, two years after their graduation at a season launch party for The Dare Tactic, a theatre company that three of the students founded during their sophomore year of undergraduate studies.

Loading Comments...
Need help with the Commons? Visit our
help page Send us a message