Pregnancy and Persona: Negotiating Authority in the Classroom

A Personal Introduction to Trauma-Informed Teaching

In Search of Meaning: Coop-ing with the World Out There

The experience of pregnancy is one that is defined by doing everything you’re told, whether it’s right or wrong—the discipline to obey, to erase yourself—how well can you perform erasure? This is the measure of how good of a pregnant woman you are. Pregnancy is perfectionism, performing for others. Yet, the body serves as a reminder this is impossible—the body trumps erasure of the messy whole.

I was in my second trimester and feeling good. The crippling nausea had all but passed, as long as I made sure to pack plenty of snacks to accompany me to Queens College, the Graduate Center, and UFT Brooklyn—some days, all three locations—so my stomach never got completely empty (hard-boiled eggs, cut-up cucumber, Clif bars, and apple slices were my staples ).

One evening, as I sat and looked over some papers in class, a student arrived late, walked by my desk, bent over, touched my belly, and whispered, “When are you going to give up the heels?”

Teaching while pregnant poses a particular set of challenges for women in academia, not to mention those who teach at CUNY—from daily commutes on public transportation; to adapting past pedagogy to accommodate emotional and physical exhaustion; to communicating with students about a private life that is no longer private. As the above scenario demonstrates, however, teaching while pregnant often drags broader issues of professionalism and gender in the academy into light.

Did I, do I, love stomping around the boroughs of New York in heels? No, but as my pregnancy progressed, and my commutes became more difficult, I was forced to face the fact that heels are one of the easier ways I perform authority in the classroom as a young, female adjunct—and that I was not going to “give them up” without a fight, without trying every kind of gel insert. My CUNY and SUNY students are more often than not older than me, taller than me, and, as all kinds of individuals with different intelligences and types of knowledge, smarter than me. Heels are my version of a bad combover (see Lauren Berlant’s blog posts on the “Combover Subject” for more on how subjects work in vain to veil their own lack and failure).

My less guilty strategies for gaining authority in academic spaces are honesty, transparency, humility, and a willingness to be wrong, which is why I told my students at Queens College I was pregnant on the first day of class, even though I might’ve been able to get away with not doing so, as it was early in my second trimester. I wanted to let them know why I might need to leave a three-hour class a couple of times to use the bathroom, or why we might have to hold class discussion online on the day I had my monthly appointment. I announced my pregnancy while discussing the policy I include in all of my syllabi, “Commitment to Your Success,” one that I fashioned to let students know that my expectations of them are thoughtful and mutual. This policy has undoubtedly helped me gain authority in a genuine way, by letting students know I’m on their side from the get-go, and that we are in it—the experience of learning in a college classroom—together.

I would be lying, though, if I said I’m not still struggling with and, at times, regretting my polite responses to the comments on my pregnant body and how I dressed it, especially from colleagues who should’ve considered the fact that my choice to wear heels was my own as a grown, professional woman. Although how female instructors dress is disproportionately commented on, frequent comments about my heels started, for me, when I became visibly pregnant, and they did not just come from students. Even my most feminist colleagues became gravely concerned about my refusal “to give up the heels.” At a Shakespeare conference, my shoes were commented on by both an elderly man, distressed by the sight of me wearing them on an escalator, and a young, female colleague who asked, “Are you sure you’re OK to wear those heels?” As a pregnant academic, I not only struggled with how to dress a female body but a pregnant body, one that demanded an additional erasure of any “self” whose needs might conflict with those of her unborn child, as well as the expectations of her students and colleagues. (For those reading interested in what they can say to best support their pregnant colleagues, one of my favorite questions to answer when I was expecting was, “How are you feeling?”)

So, in addition to transparency and honesty during pregnancy, I also want to suggest keeping your version of heels in your office if you, like me, feel better wearing them, and to respond to any comments about this wardrobe choice with whatever strategies feel best to you, from direct confrontation to subtle replies. I found silence and blank stares particularly effective. One of my colleagues told me she writes down in a notebook all of the microaggressions she encounters as a woman in academia. At the time, I responded with, “Why would you want to keep those and make them permanent?” She said that acknowledging them helped her let them go. But however you choose to work through unwanted comments, I’ve found it’s most important to have some compassion and empathy for yourself during pregnancy, a strange but inarguably generative time.

I stood in front of the mirror the other day and could see all the full, blue veins in my chest and stomach. It was a sublime experience; I was terrified by the sight—especially since it was out of my control—but there was also something exceptionally beautiful about it. It’s like the whole universe was in my body and I was the whole universe, powerful, flawed, and beautiful. 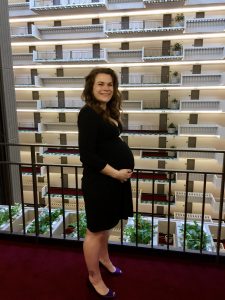 Alicia Andrzejewski is a PhD candidate in English and a contributing writer to Visible Pedagogy.

A Personal Introduction to Trauma-Informed Teaching

In Search of Meaning: Coop-ing with the World Out There

Visible Pedagogy by Visible Pedagogy is licensed under a Creative Commons Attribution-NonCommercial 4.0 International License.
Loading Comments...
Comment
×
Need help with the Commons? Visit our
help page Send us a message